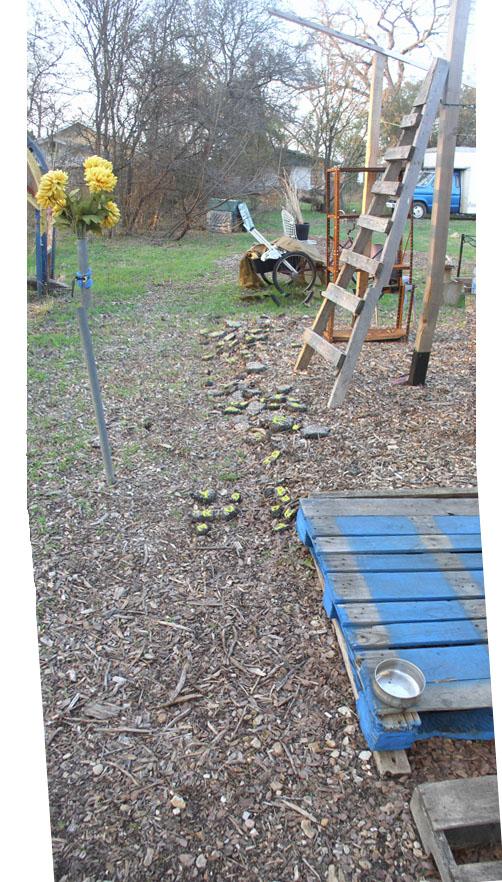 you're on a path; you're about to see something... 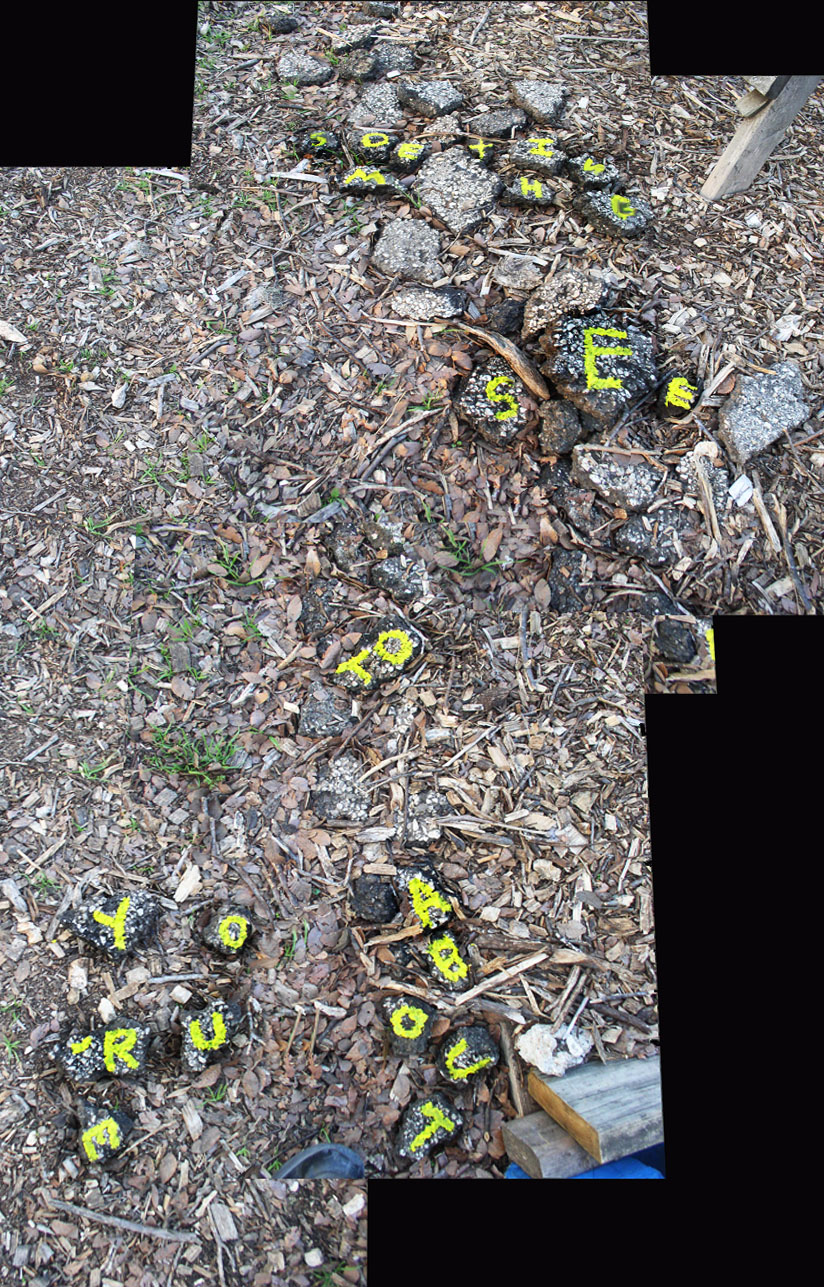 YOU'RE ABOUT TO SEE SOMETHING

At our plaza – stop#129, 2608 Rogers Ave. – there will be a bountiful display of art to look at, including:
* Science Bear Arcade:  Palfloat brand homemade gifts and souvenirs, plus framed art by Chad Hopper for your walls.
* Bargain prices on fine art collage plus cheap but delightful prints by myself.
* A million photos by Fernando Flores hung on a crazy fence.
* Kevin Pope art.
AND…
* The “Permanent Collection” — that is, the combined 2608B household art collection, featuring 30 different artists, displayed for your discovering pleasure inside our home.  You will be met at the door by Chips the dog, who likes you but will bark until you offer him a palm to sniff.

Also, there is a DIY sculpture garden!!

Throughout the day, I will be alternating between “keepin it real” and performing a piece entitled “Self Employment”.  This performance piece will include doing the work of organizing materials and people for the creation of a Social Experiment/Employment Agency/Recycling Center/Sovereign Nation which culminates on Day 4.  If you are interested in being a participant, ask about Jobs.

As for treats, there will probably just be some cider.  (Unless someone gets motivated to make popcorn balls or soup.)

Much of the Day 1 displays will have to turn inside out so as to not be ruined by rain.  This makes for some interesting challenges.  Maybe we’ll get around to the soup on this day.  I think some music would be in order as well.  I can still conduct job interviews, too!

MINI ALTERNATIVE JOB FAIR
! ! ! !
(You can get paid in Hours via Austin Time Exchange Network.)

{In which we all find our role(s) within the game(s) and perform our tasks with admirable tenacity, leading to a visible and tangible transformation of materials, as well as the unpredictable manifestion of a bureaucratic dream.} 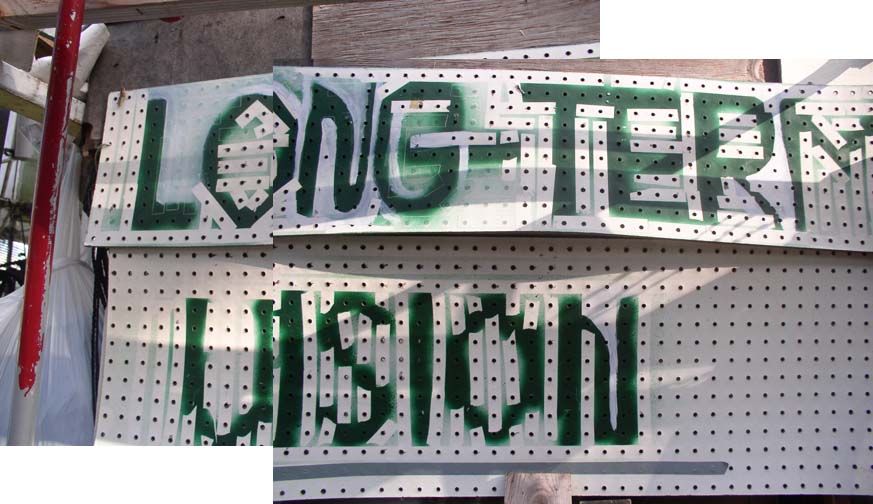 “…contemplating the universe, remodeling everything…” 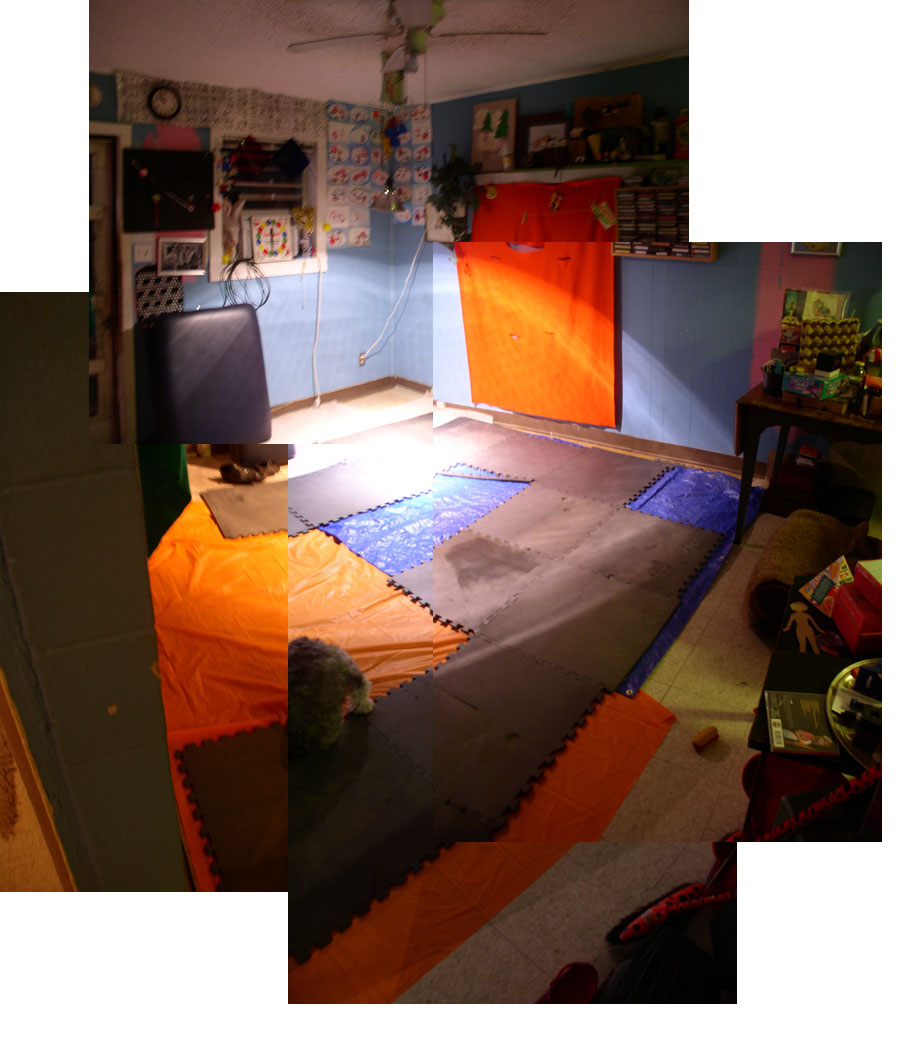 Yes, I’ve been BEHIND on blogging (leaving a flier for an event-past up for 2 weeks, oh my!).  So here is a photo to savor while I get all my ducks in a row!

The year is rounding out to a close.  That means almost 1 year of Synaesthetic Breakfast, and an opportune time to write a NEW Artist’s Statement, new goals, and to re-organize my folders once again! (If you haven’t noticed, I love RE-organizing… more than maintaining pre-established order.  I think it’s genetic.  My maternal grandmother used to rearrange the furniture to the extreme of making her children switch rooms.  My father liked to remodel everything…)

Off the cuff I’m going to throw out there that I would like to do some self-interviews as a way of synthesizing, digesting all this work that I’ve been producing since moving to Austin (almost) 5 years ago.  Five years– that’s like going to college all over again!  And it really has been a time of self-education and creative development that I am proud of.  I’ve flailed from time to time for lack of “structure” and moaned about my miserable record of documenting/cataloging/writing about everything that has happened…. but those failures aside, I am pretty happy about what I have achieved and what I’m working on now.  (I almost said “where I’m headed,” but the crystal ball is being coy just now.)

For the future of Synaesthetic Breakfast: more photos, colors, textures; more writing about other people, project updates and catching up with my self-documentation goals.

Among the many things I’ve been meaning to blog about but haven’t within the past weeks/months/year:
– The interview transcription from Neighborhood Acupuncture Project, covering topics such as how co-healing is actually more effective than treatment in isolation…
– The video/audio/photo documentary of Scott and Jen’s ever-evolving garden-scape (outside of but not really separate from their Museum of Natural and Artificial Ephemerata)
– My report on Saturn Return now that I’ve gone through it! 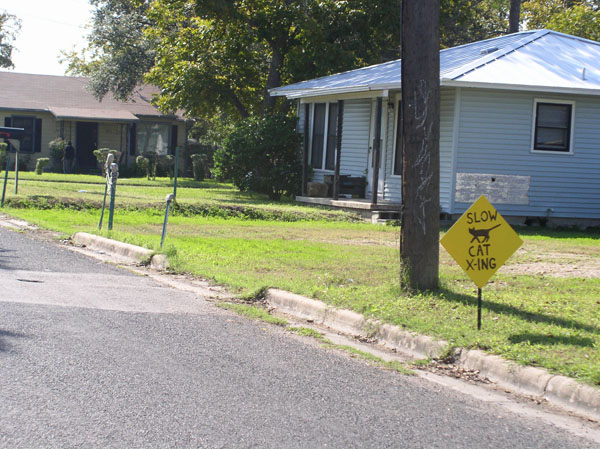 My dog has a lot of cat friends. I put up this sign to try and protect them from those crazy drivers! 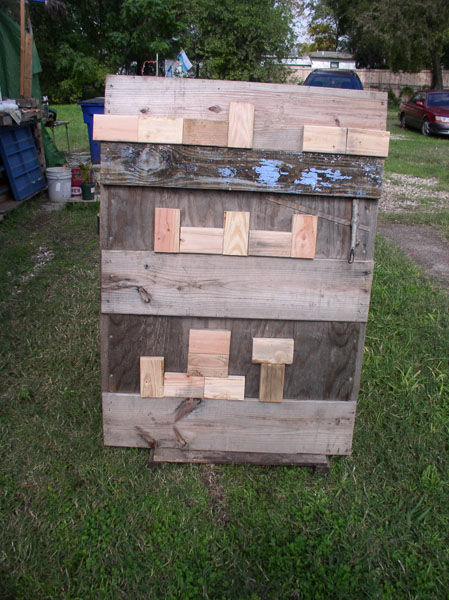 I had fun visiting studios during E.A.S.T. Then I came home and played with blocks. 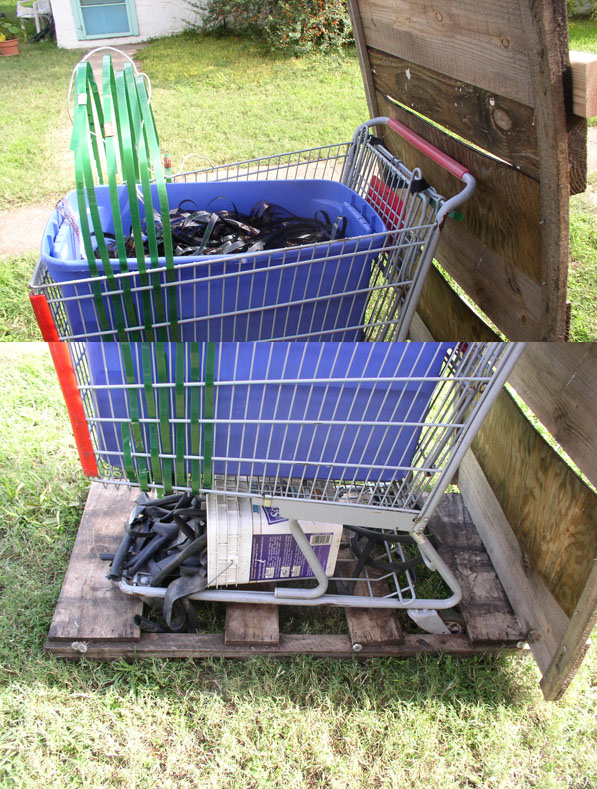 Another Big Idea/fantasy plan that I haven’t blogged about: Science+Art Barn-Raising.

Basically, my studio/yard is a test-site where collected/scavenged materials (mostly man-made post-consumer scraps) are subjected to extreme (Texas) weather conditions.

Two teams (coexisting, not opposing) will converge on the site = Scientists, studying the breakdown of these materials into the environment + Artists, creating conceptual work from and with the materials through constant rearrangement and manipulation.

Science is a steady collecting of data that must be grounded in physical reality.  As an artist, I am immersed in this physical reality and its constant changes; I observe the weather, the passage of time, the biodegrading occurring.  I struggle to keep up with the challenges of this “outdoor studio”, this “man v. nature” drama which usually results in the ego/idea surrendering to that which is so much larger.  Decomposition keeps pace with composition. I find myself gluing things less and less. So maybe this struggle and surrender, this process, IS my material?  I let go and observe the transformational work of Nature?  If I could morph into a part-time scientist, it could be my subject of study, which might actually be objectively useful in the field of environmental science.  As it is, I am kind of stuck being an artist (at least for now), so I would like to invite some other people to come be the scientists.

Consider this a rough draft!  Please do: edit, question, comment!